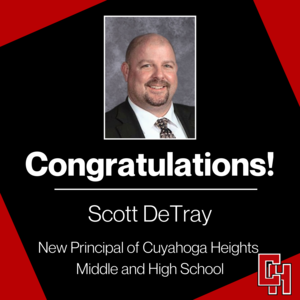 At the June 29 meeting, the Cuyahoga Heights Board of Education appointed Scott D. DeTray as the next principal of Cuyahoga Heights High School/Middle School.  DeTray’s contract extends from August 1, 2022-July 31, 2025.

"Scott brings with him a wealth of experience working with students with varying educational needs at both the middle school and high school levels,” said Superintendent Tom Evans.  “His unique perspective as a collaborator, communicator, and educational leader will lend itself well to Cuyahoga Heights and we're excited to bring him on board."